Released in March of 2022 by Mascot Gaming, Across the Universe slot has once again proven the proficiency of providers in making banger releases. The game quickly established itself as a new fan favorite among gamblers and continued gaining traction. Now, we are glad to inform you that it has won its first award out of many more to come! 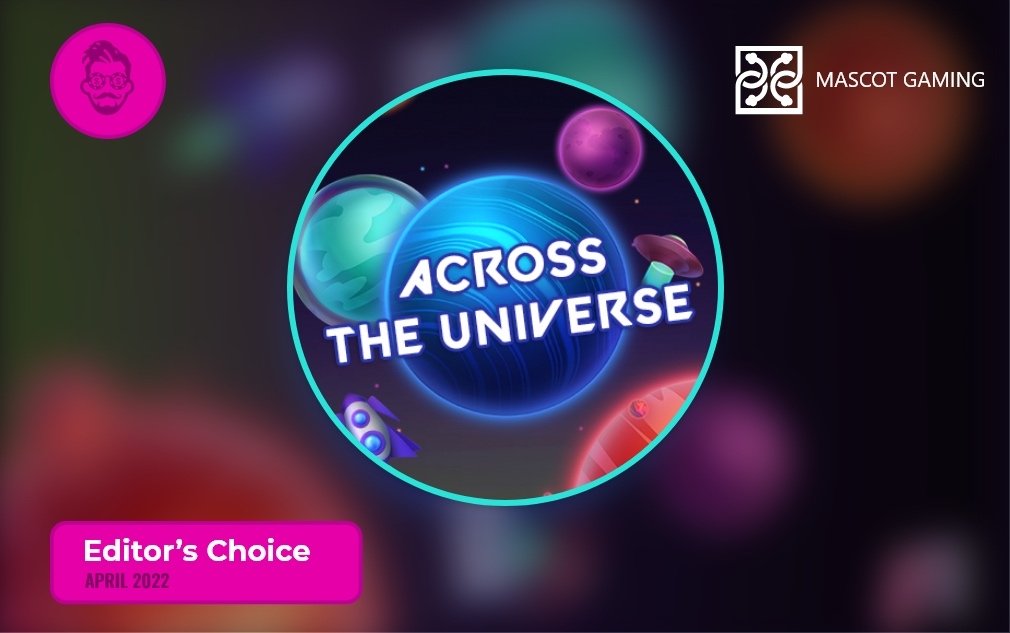 On April 6, 2022, only a month after the launch of Across the Universe, CasinoFreak portal picked it as an Editor’s Choice. The value of this title is difficult to overestimate as a lot of aspects including visuals, gameplay mechanics and technical execution of features have to be considered beforehand. CasinoFreak itself is a reputable gambling resource that has been helping players to find best online casinos, games and promotions since 2014. Thus, receiving such an attention from it is an important milestone for Across the Universe slot in particular as well as for Mascot Gaming company overall.

Across the Universe – Editor’s Choice

You can check out the full article on the CasinoFreak’s website but we want to give a brief overview of the factors that the portal emphasized on while awarding Across the Universe slot. Here are the main of them:

CasinoFreak claims that all of the aspects combined make Across the Universe a perfect choice for casual gamblers due to interesting gameplay and low risks. The portal also mentioned its 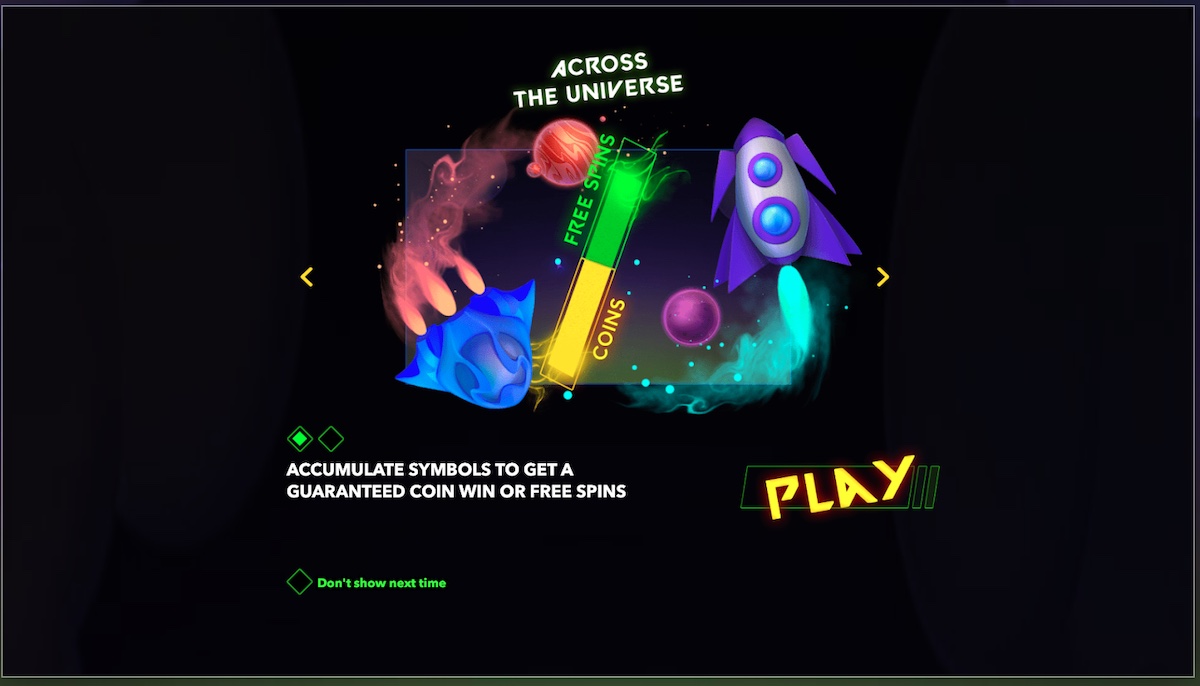 More about Across the Universe slot

Starting off with the theme of the game, it is undeniably nothing short of breathtaking. This time Mascot Gaming takes you to the distant unknown of the vast space. Even though cosmic design is quite common to online slots, nobody has done it as well as Mascot yet; untouched planets and lonely meteorites as symbols and different types of spaceships as special features make the journey unpredictable yet exciting. Besides, each symbol provides different winnings, so set yourself to discover the most profitable combinations.

Everything else, from the background filled with myriads of stars and unique fonts the developer used make for deep immersion in the gameplay. And of course we should not forget about the sound design! Mascot Gaming believes that music is an important part of the experience, which is why it creates unique soundtracks for every release, including Across the Universe. 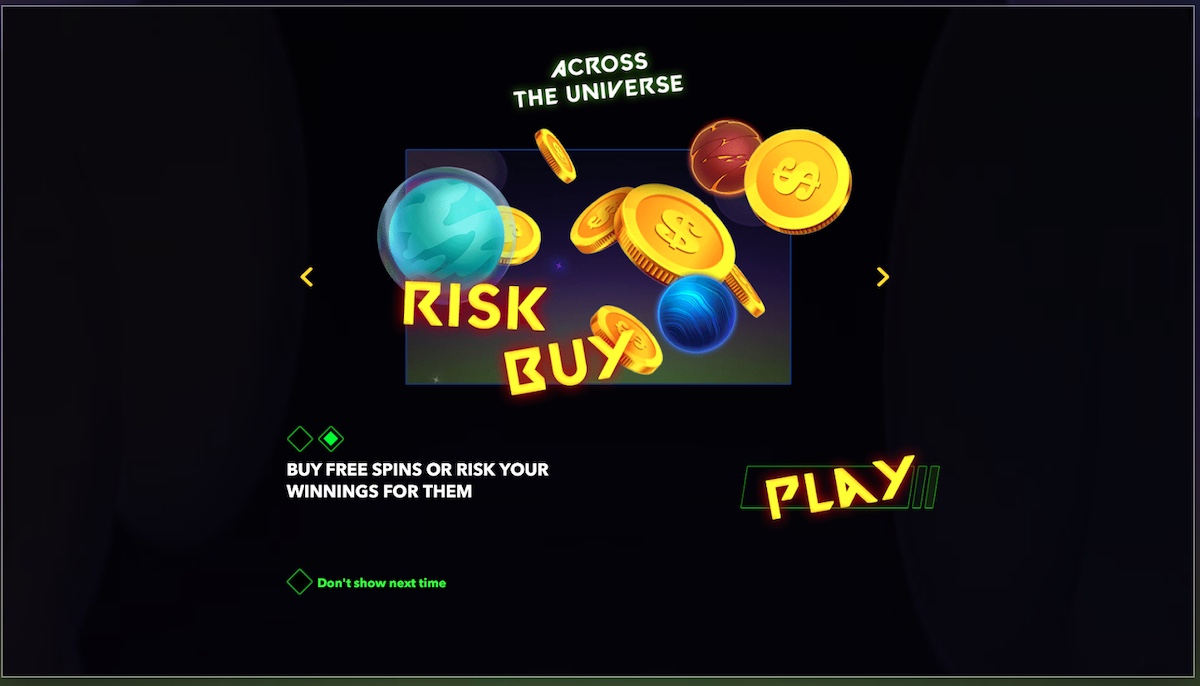 While the core gameplay of Across the Universe is similar to alternative online video slots, the availability of multiple features is what makes it special.

Wild at Across the Universe slot is represented by a symbol of a Flying Saucer. It can substitute any other symbol on the reels to form winning combinations and increase the player’s chances of success.

While playing the game, you can hit Scatter symbols that look like Space Rocket. This is accompanied by a special animation that fills the green “Free spins” scale on the left side of the screen. Triggering the series of free spins requires filling it to the brim by hitting 40 Scatter symbols. Be aware that FS are played right at the bet at which they were activated.

In addition to free spins, there is also a yellow “Coins” scale on the screen. To fill it up, you have to hit 25 Bonus symbols that look like Alien Spaceship. Upon doing so, the player receives a cash prize, which can be withdrawn after meeting wagering requirements. 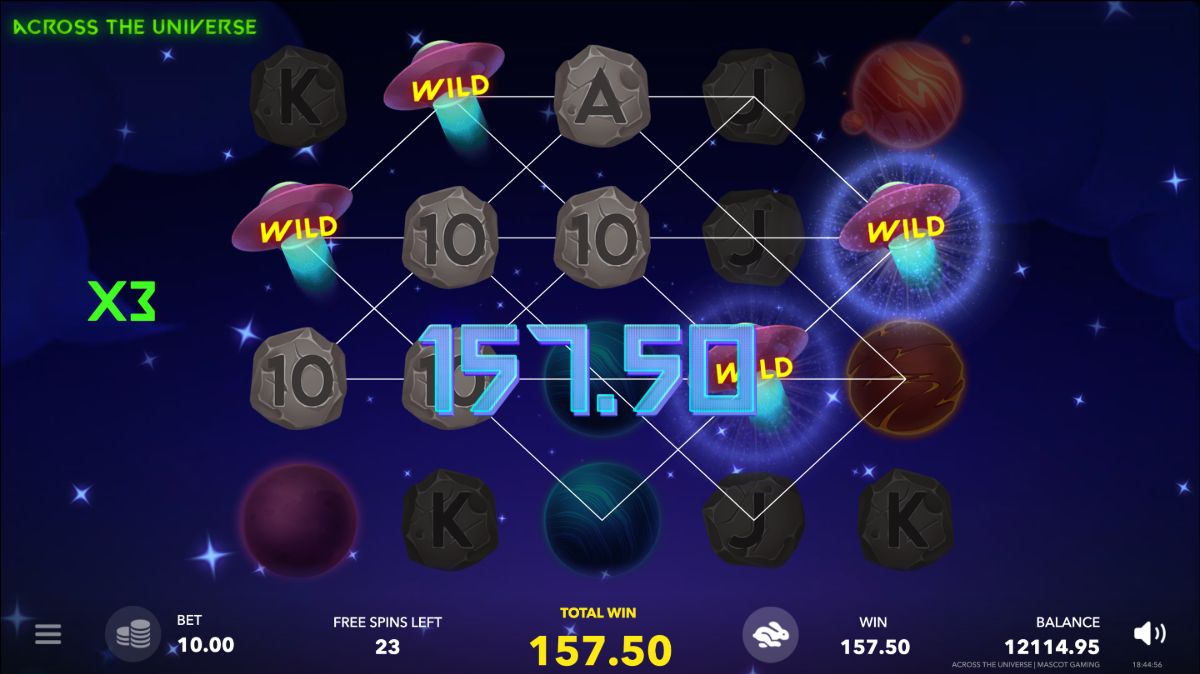 Traditional to Mascot Gaming slots Risk&Buy feature allows launching a series of free spins after every round. The player can exchange the winnings from the round for the FS or purchase them with some coins. This is not obligatory but it is nice to be able to activate a special feature when you want it.

Winning the Editor’s Choice award from the CasinoFreak portal Across the Universe slot has hit an important milestone. It definitely deserves attention from online gamblers for its stunning atmosphere, addictive gameplay and unique features.