Keep your life tucked away in La Fiesta de Muertos, a new exciting video slot by Mascot Gaming. With thrilling wild and scatters, a highly lucrative Bonus Game paired with creepy aesthetics, this isn’t definitely the typical game you are used to. And yet, which slot gaming companies could introduce the extraordinary Mexican tradition of giving honors to the departed into a video slot better than Mascot?! 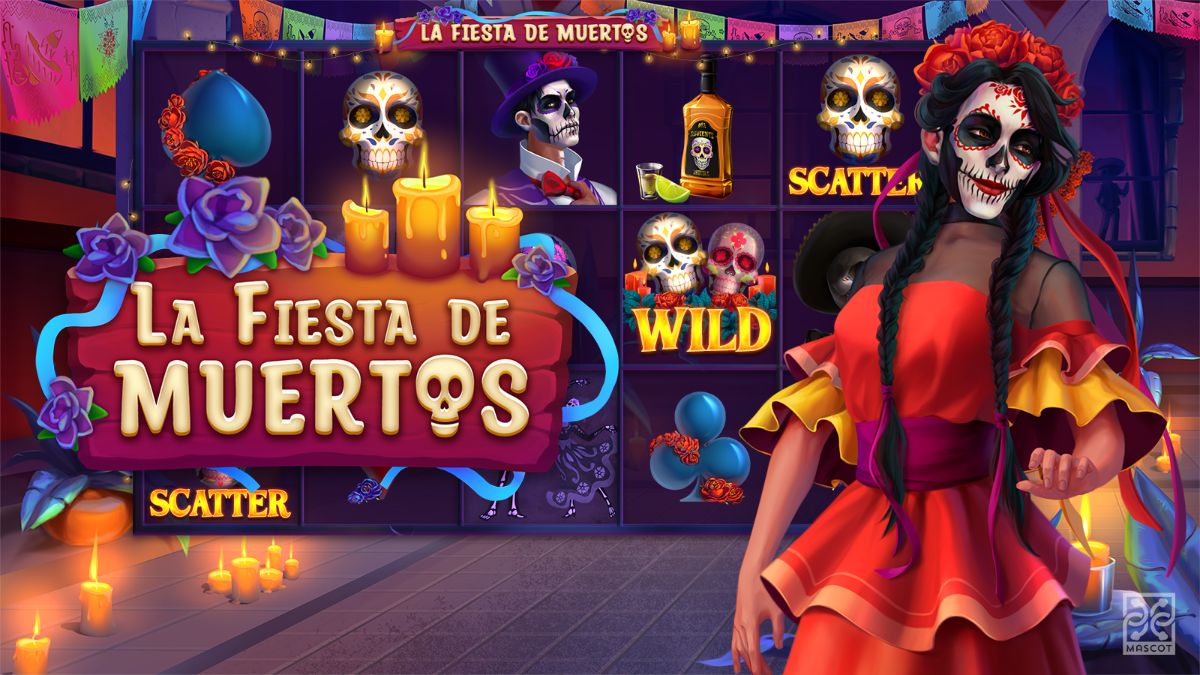 Let us dive into this fantastic game to see what you can expect aside from goosebumps.

Set on a five-reel and three-row grid, La Fiesta de Muertos offers 15 paylines to grab money from the dead. The whole thing looks colorful and celebratory - the symbols, the background, the decoration … you feel in the heart of this Mexican fest and get the vibes perfectly! The RTP rate is 95.22%, and the Hit Rate is 43.4%. The game has low volatility. This, along with such low bets possible as 0.15 the spin, makes the game an ideal variant for slow-goers. If you are not in a rush after a million and prefer to enjoy the pace of the slot, you should not miss out on the La Fiesta de Muertos video slot! 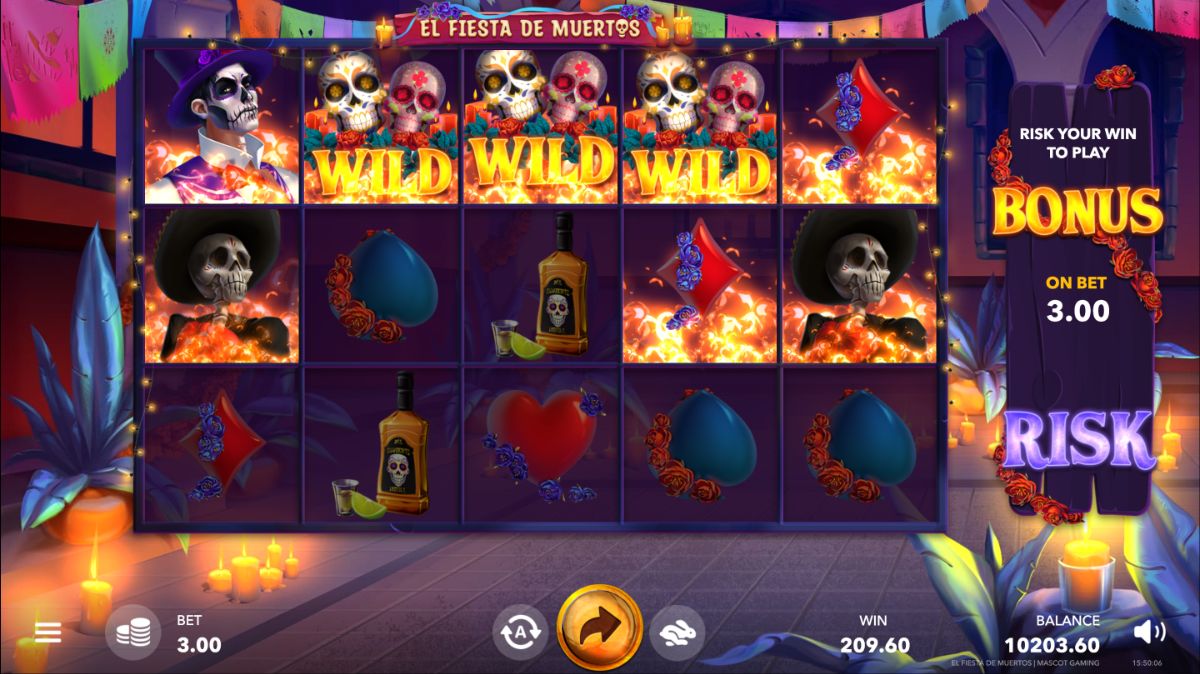 Mascot’s game developers did a great job picturing “Los Muertos” in their best outfits, prepared for the fiesta! The game symbols for low value are playing card suits, richly decorated with flowers. They pay from 0.03 to 0.75 for three to five of a kind. Higher paying symbols are more interesting, depicting the spirit of the holiday the best. Here are they:

Aside from this array of regular symbols, the La Fiesta de Muertos game by Mascot slot gaming companies features special symbols, including the Wild depicted by a double skull. The latter can substitute all regular symbols to build winning combinations easier.

Mascot “granted” the slot two scatters - a Gold Skull Scatter and the Pink Skull Scatter. Land two and more Gold Skull scatters anywhere on the reels to get paid from 0.30 to 3.75 and more. The other function of the scatter is to trigger the Bonus Game. To do this, three or more scatters need to be landed on the reels in any combination.

If you are familiar with Mascot Gaming slots, you must have guessed that La Fiesta de Muertos has several extra features to spice up the gameplay. Portraited via colored skulls, these symbols are Multiplier, Super Multiplier, Modifier, and Upgrade. More on them later. 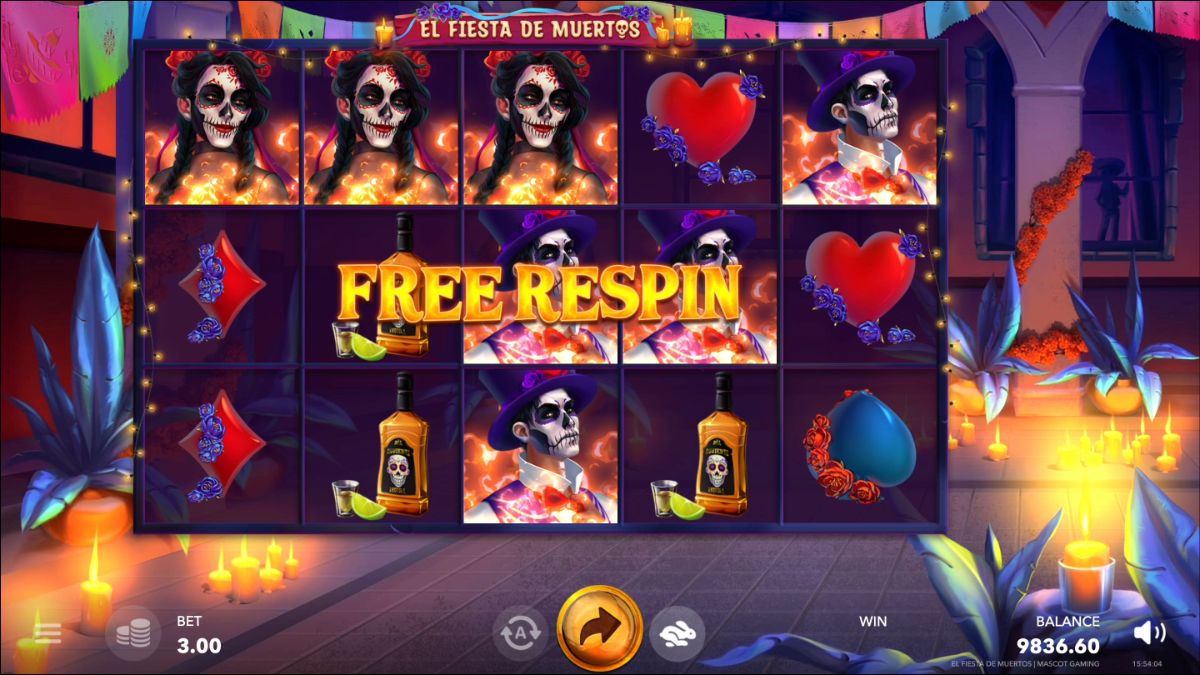 La Fiesta de Muertos, or the Day of the Dead, is a national holiday celebrated in Mexico which lays the basis of the slots’ theme and design. This holiday is an opportunity for the locals to remember those family members who have passed on. In fact, it’s a merry holiday; hence, it serves as a captivating theme for the online slot. You can see the lit candles inside a Mexican house, and the grid takes on the central part. And once you get a winning combination, the symbols are set on fire. The entire scene is mesmerizing and thrilling.

What game by Mascot slot gaming companies if it doesn’t have special features?! La Fiesta de Muertos has several special features that intrigue and give pace to the game. 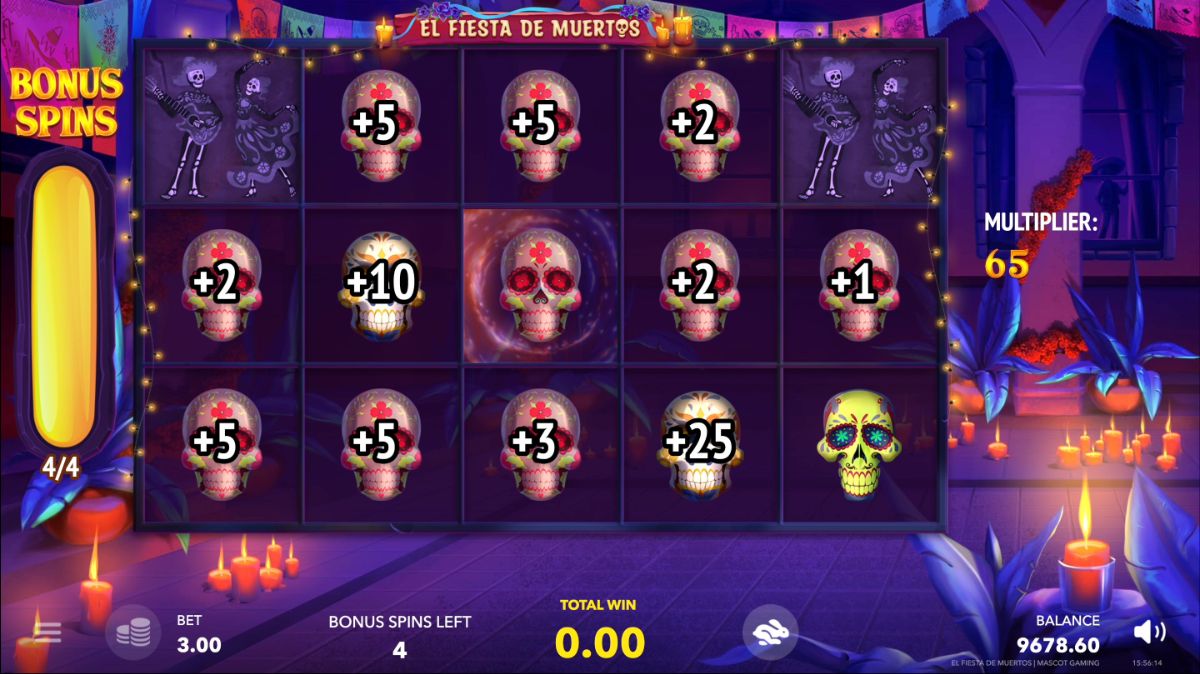 The Bonus Game starts when the Sticky Respin feature ends. At the start, you get three bonus spins to be played on the bet with which you have won the feature. And when you land a winning symbol on the screen, you will automatically reset the number of free spins to three.

However, what makes this in-game round so unique and attractive, is that you can land only the Multiplier, Super Multiplier, Modifier, and Upgrade symbols. At the end of the round, the game will calculate the total win multiplier and apply it to the total bet.

The brand feature Risk&Buy suggests the player risk the current win to launch the Bonus Game or buy the feature at a specific price. This offer is active regardless of your spin outcome, so there’s always a chance to pass straight to the fun part of the game. 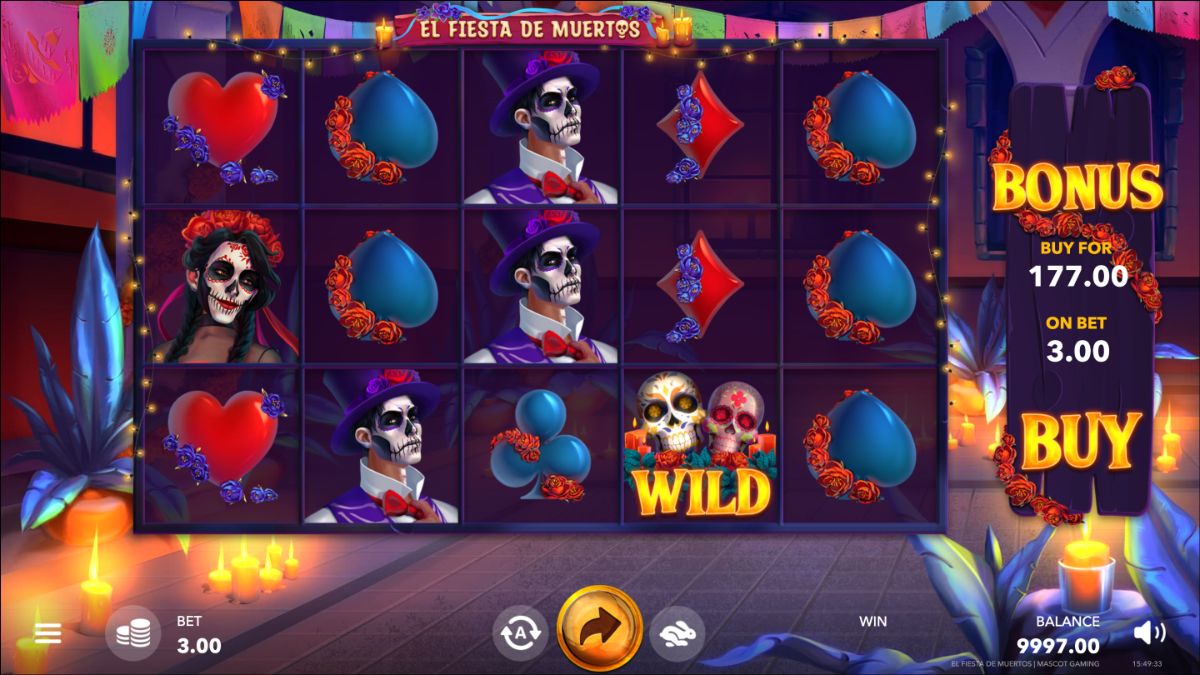 The slightly unusual but appealing theme of the game, coupled with amazing special features and interesting gameplay, make La Fiesta de Muertos video slot developed by Mascot Gaming a worthwhile option for gamblers. The game’s details are picturesque, and the game’s speed won’t let you get bored.