Providing the best gameplay for the clients is the main goal of the Mascot Gaming team. PRIMAL BET. ROCKWAYS is their latest release that offers a completely new RockWays mechanics in addition to the RockFall feature they have introduced before. Developer also went for the old-school dinosaur theme. However, the surprises do not end on that, read on to find out more. 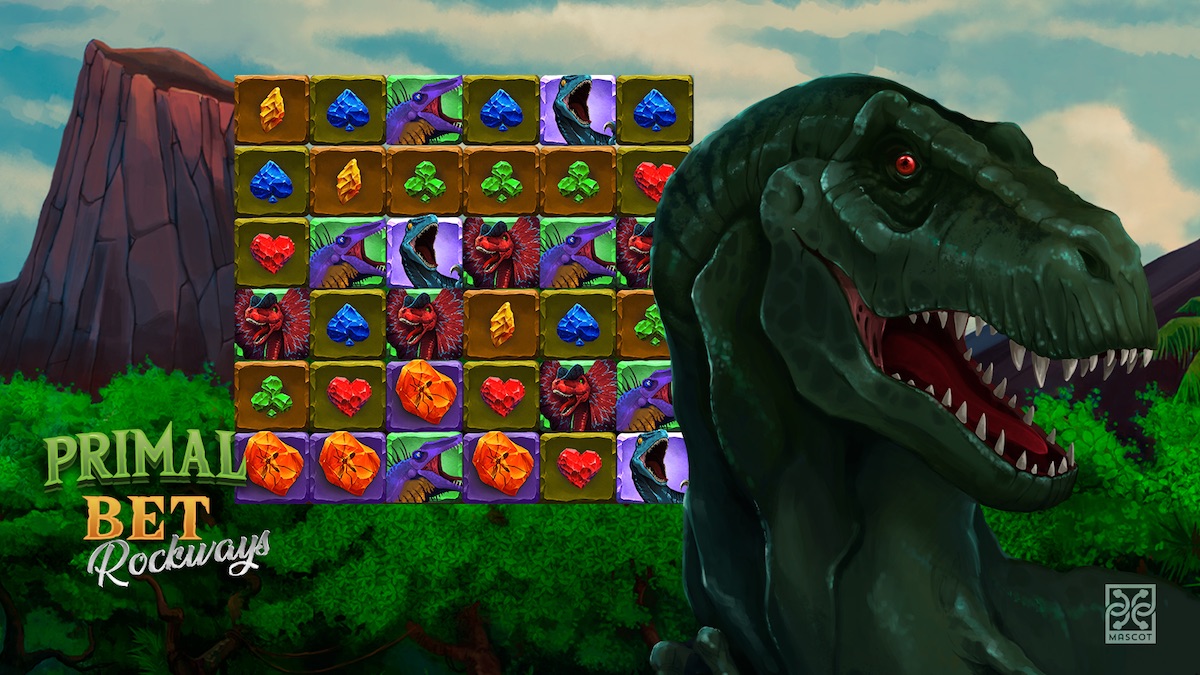 It will be possible to try out this release alongside other slots from Mascot at the upcoming igaming events, including ICE London. The demo version is already available in the corresponding section of the website too. 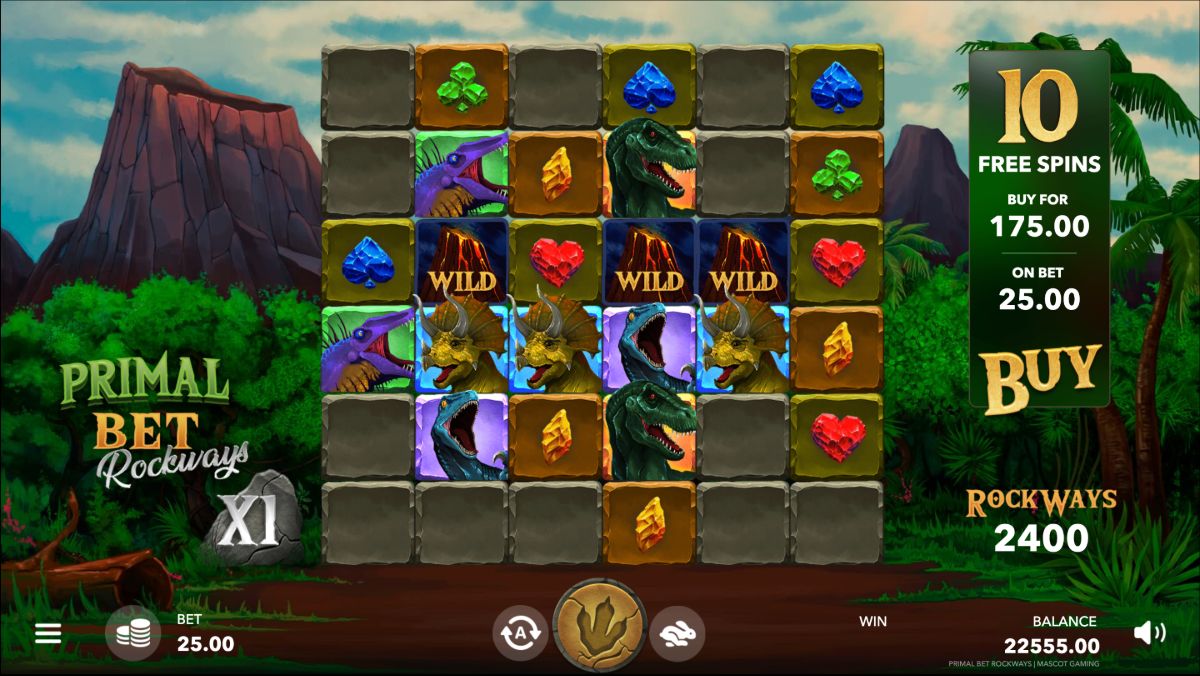 Just like all casino games video slots from Mascot Gaming, PRIMAL BET. ROCKWAYS can be launched via any mobile or desktop HTML5 browser. The game features 6 reels in 6 rows, but the catch is that the number of active symbols on each reel changes randomly with every spin. This is why the amount of pay ways varies between 64 and 46656. No wonder that the slot’s volatility is high. However, 33.2% of hit rate and 95.27% of return to player rate increase players’ chances to win big.

Let’s go over 9 featured symbols, starting from highest-paying ones:

Tyrannosaurus and Dilophosaurus are the symbols that you want to hit in combinations to get the highest payouts from the slot. There are special symbols: a Wild symbol (Volcano) and Scatter symbols (Fossil). 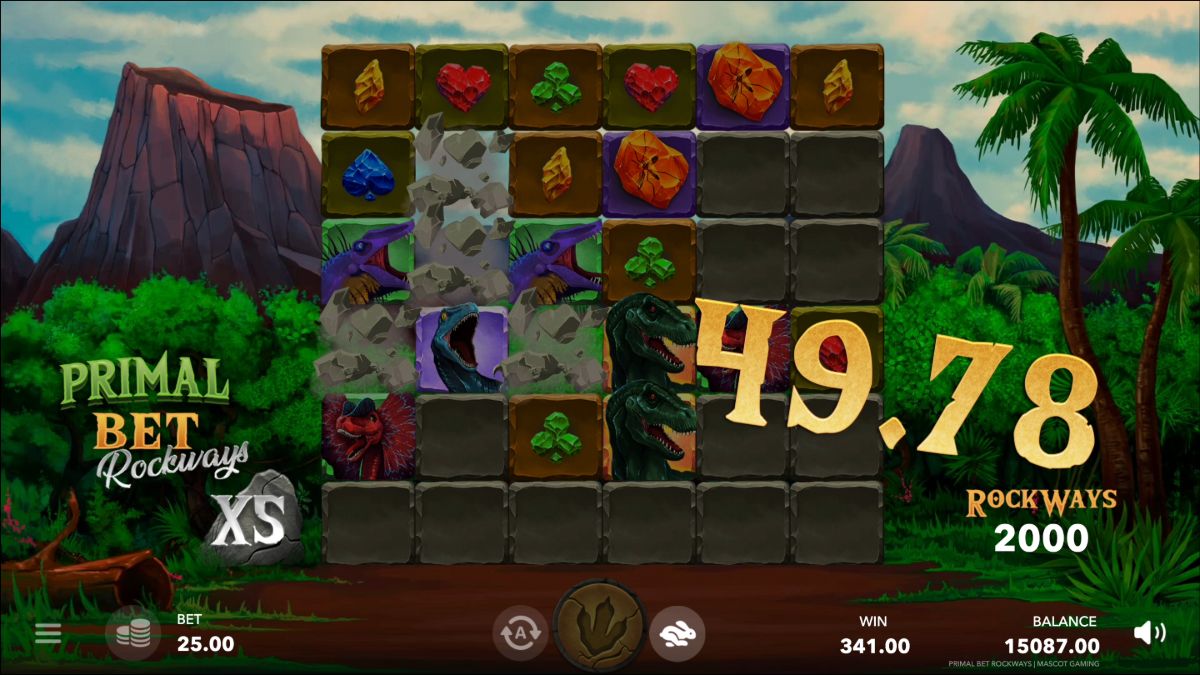 An old-school dinosaur theme returns in a new and improved form. The action of the game takes place somewhere on prehistoric Earth near an active volcano. Everything, from the environment to the symbols of huge prehistoric creatures is hostile towards the player, which adds a layer to the gambling experience. It is also important to mention an outstanding sound design that makes an immersion in the atmosphere even deeper. 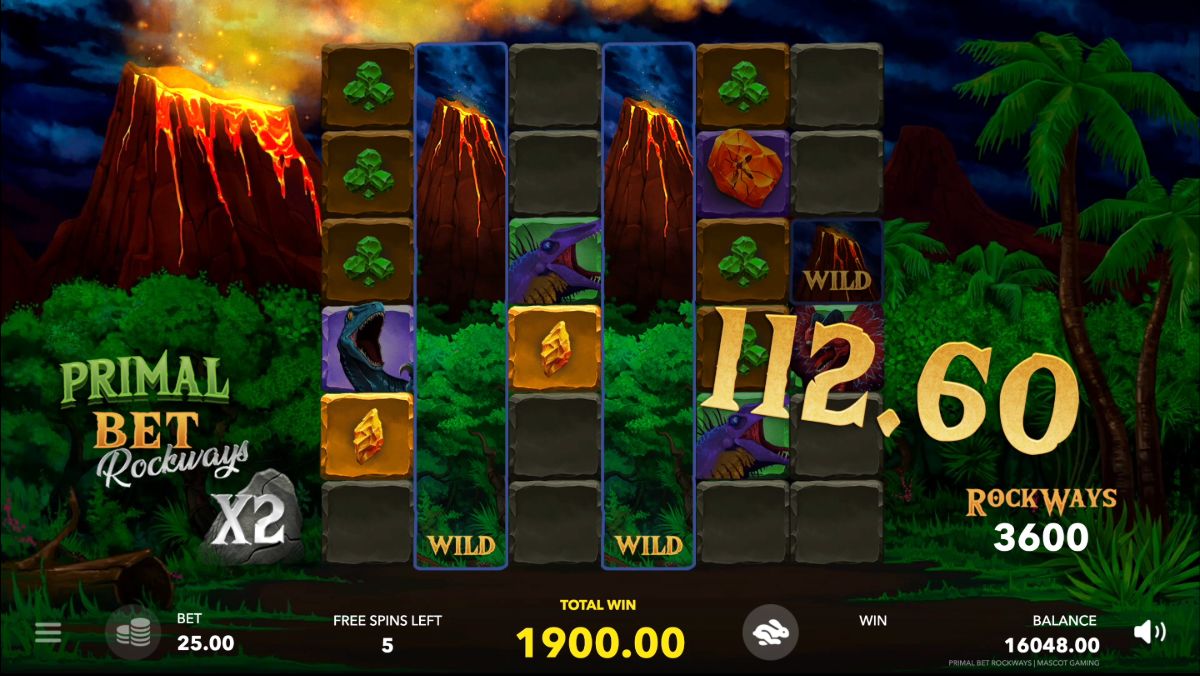 As we have already mentioned, the gameplay features are the main benefit of the PRIMAL BET. ROCKWAYS release. Mascot Gaming succeeded in implementing new mechanics that spice up the gambling experience once again.

This is the main feature of the game that has never been used in the Mascot’s releases before. Due to it, the slot does not have a fixed number of paylines, as the number of active and inactive (Blockers) symbols on the reels is different every round. The thing is that with every spin, the height of each reel changes; it can be anywhere from two to six. Keep in mind that Blockers do not participate in the combinations. You can find the number of pay ways of each spin on the right side from the playing field. 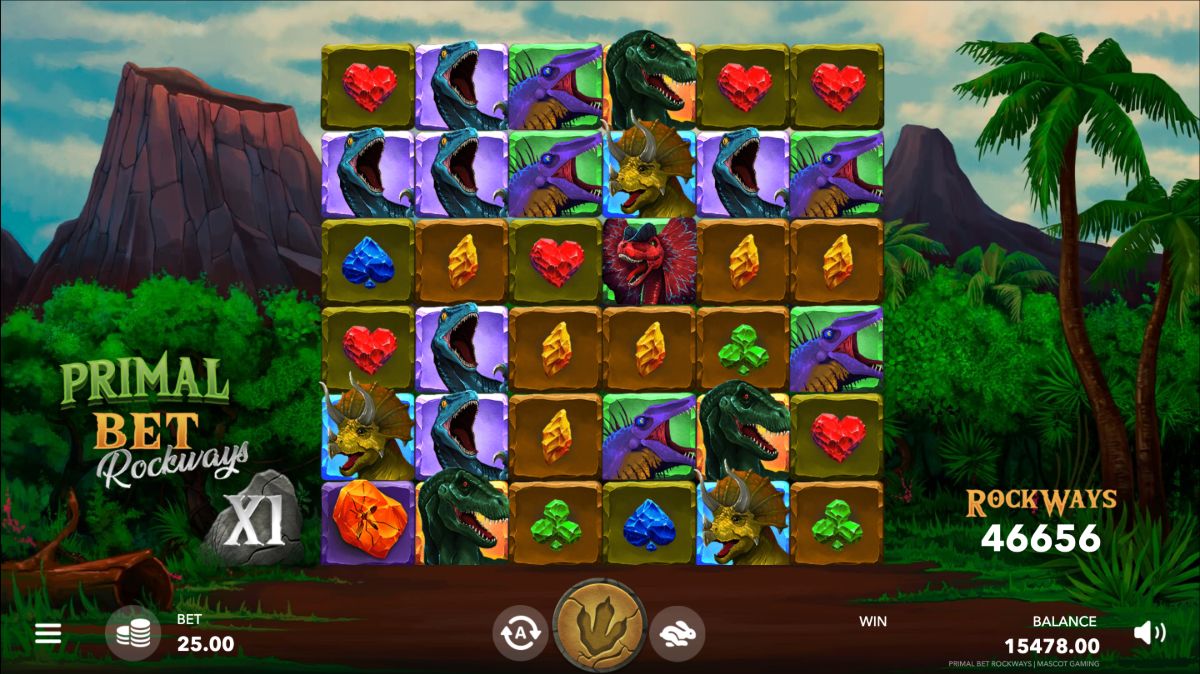 This mechanic, introduced by Mascot in Bastet and Cats slot, makes the gameplay even more unpredictable and enjoyable. After hitting a winning combination, you will see that all the symbols that were used for it explode. Instead, new active symbols drops on their place. Every activation of the RockFall feature increases the win multiplier up to x5 during the regular game and x10 during free spin series. 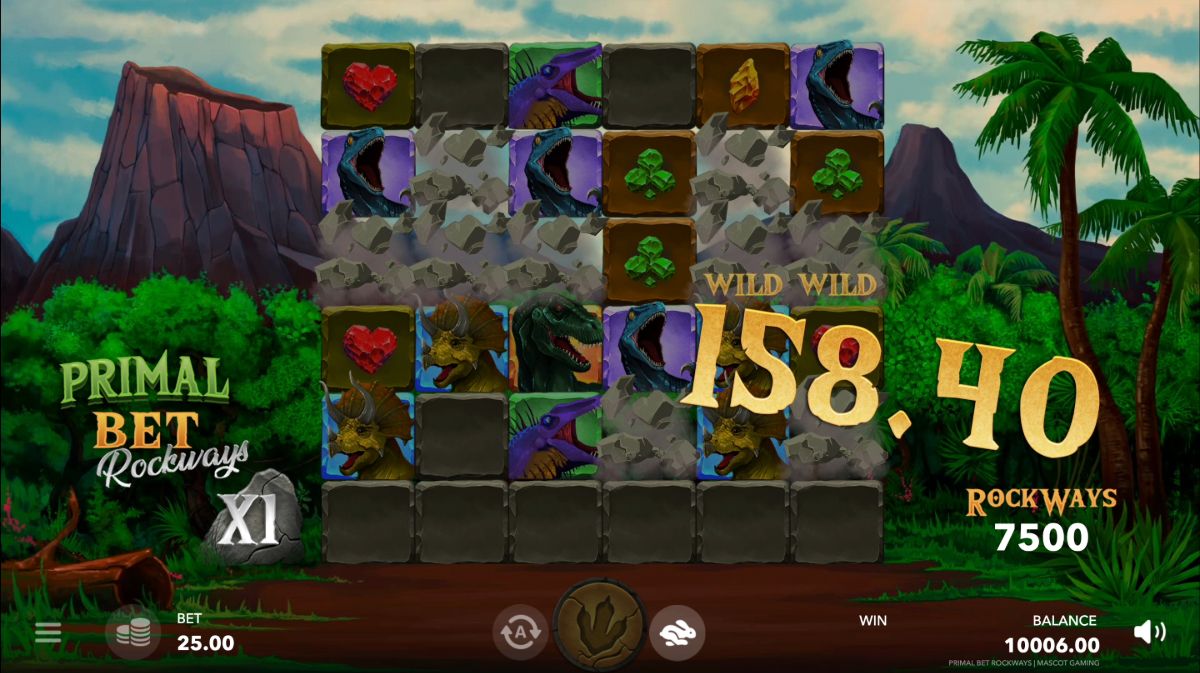 Traditionally, PRIMAL BET. ROCKWAYS release from Mascot Gaming features a Risk’n’Buy feature. It offers acquiring free spins in two different ways after each spin. If you win, you can risk your winning for going straight to the free spins series. In case of losing, you can purchase free spins for a certain amount of coins. It is completely up to the player to use or to ignore the offer. 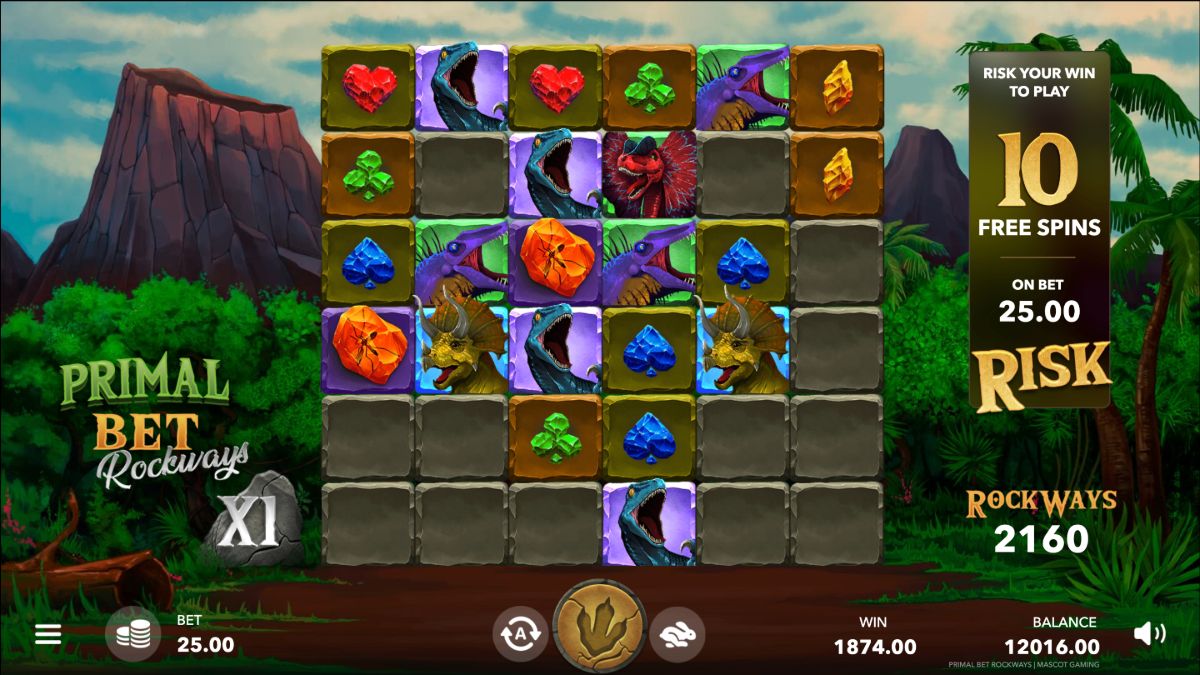 PRIMAL BET. ROCKWAYS is the most recent release from Mascot Gaming that is already available for real-money gambling on the partner websites. The provider will also introduce it at the upcoming igaming events like ICE London 2022. The new RockWays feature adds to the uniqueness of the gameplay, while the top-notch execution of the dinosaur theme creates a perfect old-school atmosphere.