RIOT 2: BLOW AND BURN – long-awaited sequel to the legendary slot

The prequel of RIOT 2: BLOW AND BURN has taken the igaming software development industry by storm in 2020 in London. This slot introduced the brand feature of Mascot Gaming releases – Risk and Buy mechanics. This time the team of Survivors fights against new antagonists while exploring the possibilities of new bonuses. Rockfall features and unique Wilds are the additions players have been waiting for. 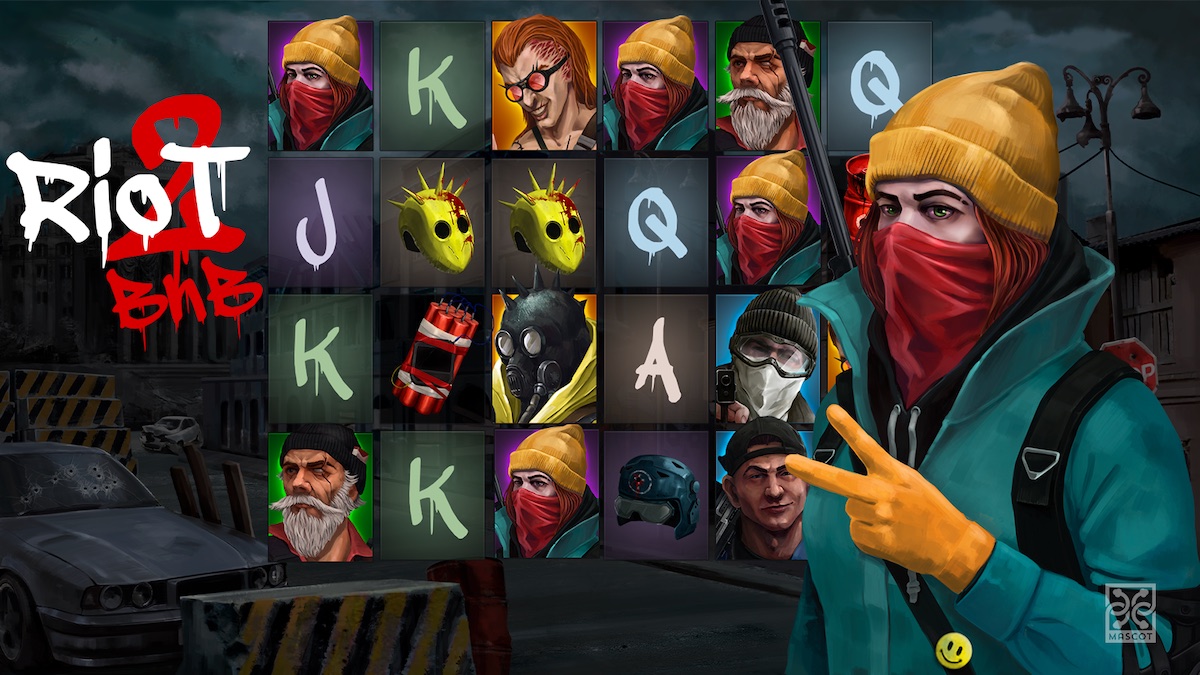 Stick around to find out all the intricacies of RIOT 2: BLOW AND BURN to get the most out of the game. By the way, you can already try out the demo version on our website or tune in for real-money gambling at partner casinos. 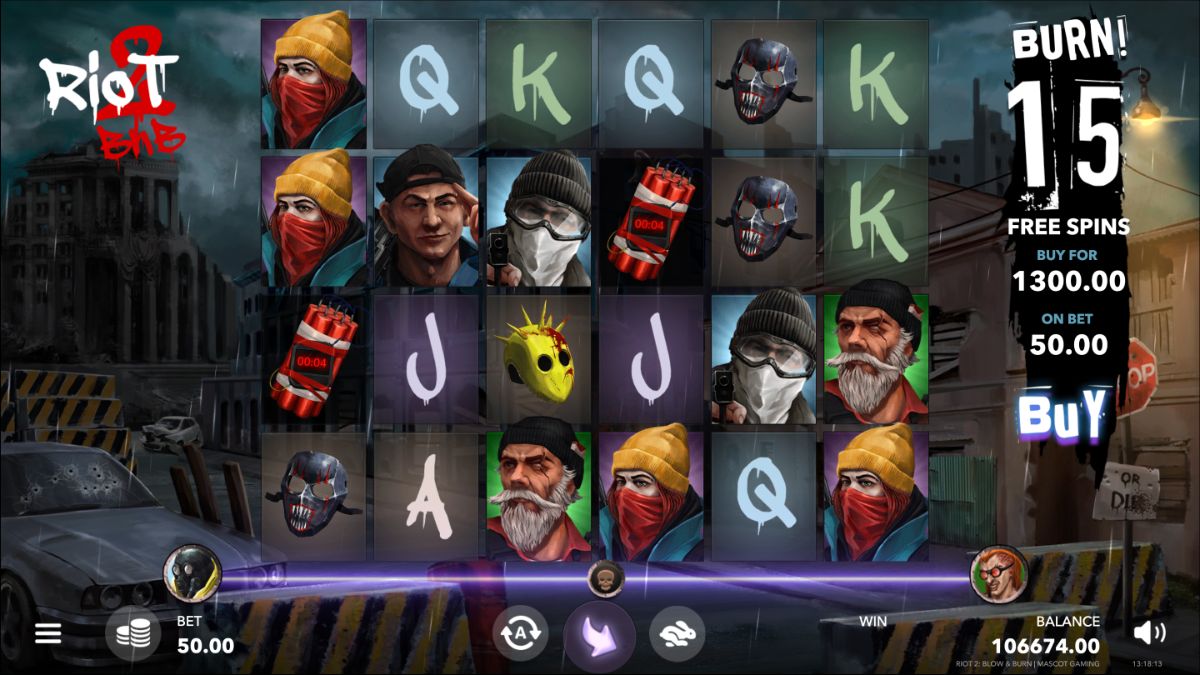 Mascot Gaming fans know that this company approaches igaming software development very seriously. RIOT 2: BLOW AND BURN is a new release that features the same quality as every other slot from the provider. First, it is accessible via any HTML5 browser. Second, the game features the layout of 6 reels in 4 rows with 25 paylines on them. Third, the medium volatility keeps the perfect balance between the risk level and rewards for winning. Here are some additional numbers that you will find important: the RTP rate is 95.38% and the Hit rate is 43.1%. Every player has good chances of winning at RIOT 2: BLOW AND BURN.

Spinning the reels, you can hit combinations with 11 original symbols of different value; symbols featuring members of survivors’ team pay out more while those with letters A, K, Q, and J pay less. Bomberman and Firestarter are the unique Wild symbols that substitute any other symbol on the screen. There are also two types of Scatter symbol: Dynamite and Barrel with oil. 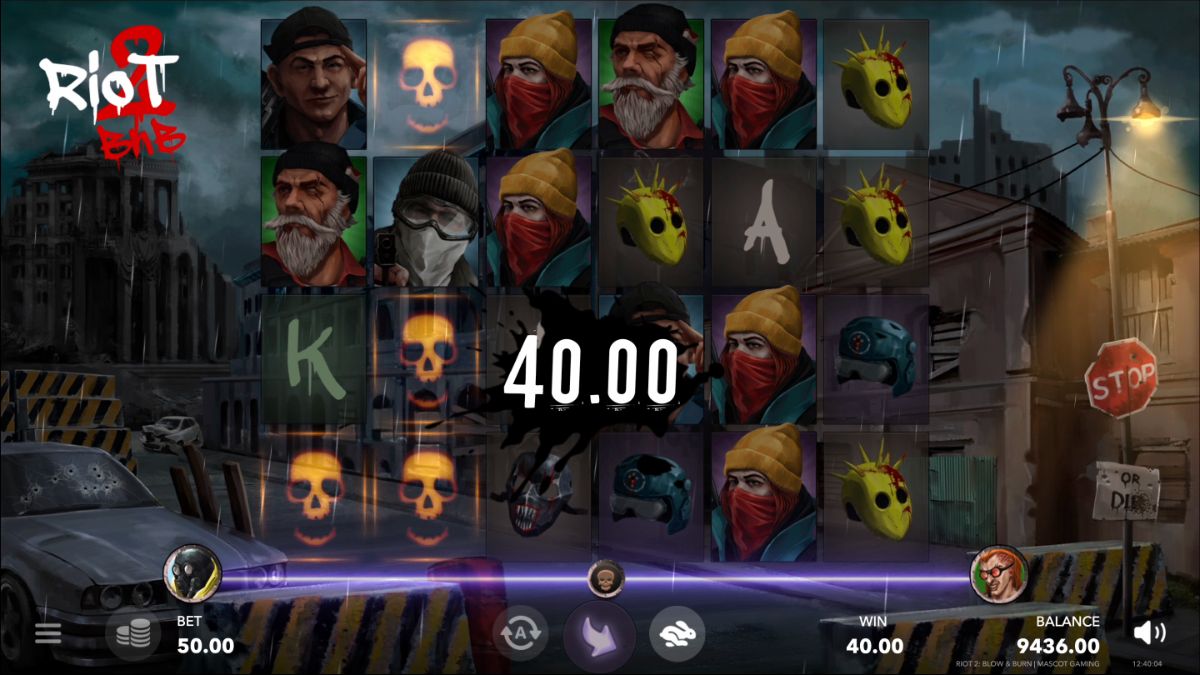 RIOT 2: BLOW AND BURN – theme of the slot

With its new release, Mascot Gaming allows you to join the band of Survivors that fight against Bomberman and Firestarter in an apocalyptic setting. To win stunning prizes you have to face antagonists in the center of a destroyed city and overcome them. Sharp animations and unique fonts add to the atmosphere of the game. Just like any other release from Mascot, RIOT 2: BLOW AND BURN features an original soundtrack that will be an exciting throwback to the prequel of the game for some players. 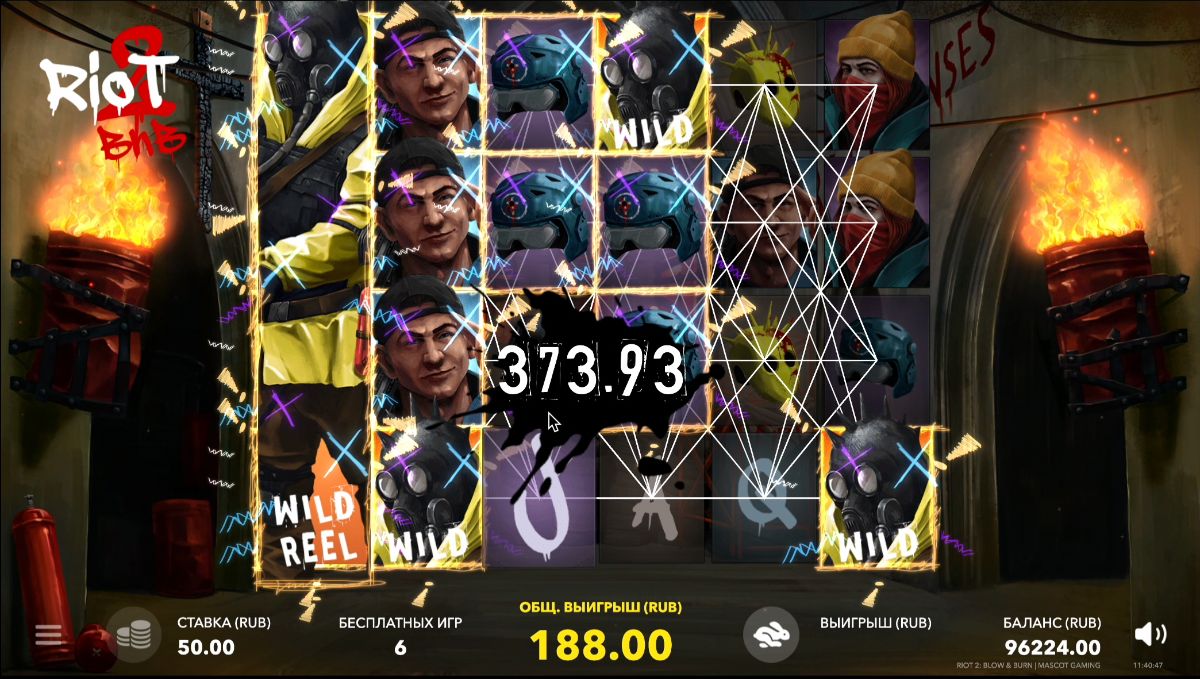 Igaming software development by Mascot Gaming aims to provide unique high-quality gambling experience to the clients. While design and interface are the important factors, the mechanics and features make the gameplay interesting. 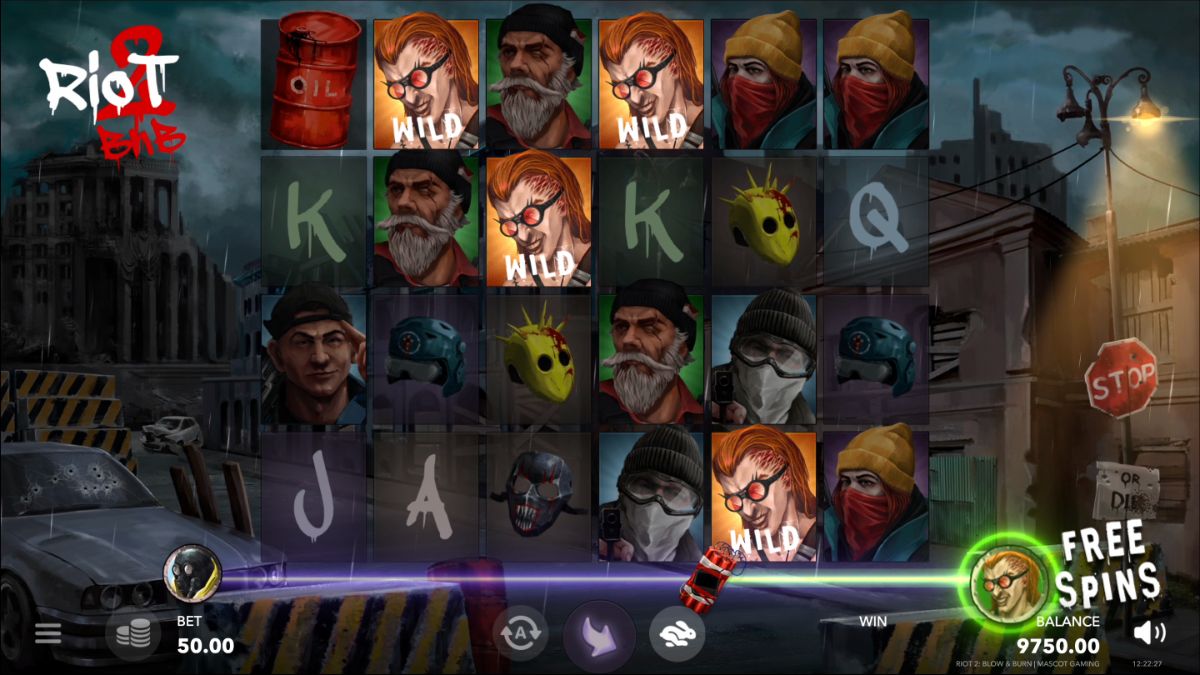 Dynamite and Barrel scatters turn into Bomberman and Firestarter Wilds respectively if there are at least 4 of the same type appear on the screen. Wild symbols then fill up the “Blow!” and “Burn!” scales below the reels. It happens in a “tug of war” mode; the type of free spins series activated depends on where the scale goes during the regular game.

To activate it the player has to fill up the 12 bars on the Blow! Scale. The feature launches the series of 15 Blow! FS. During the series, you can hit 4 Dynamite symbols to trigger the Blow! Feature. 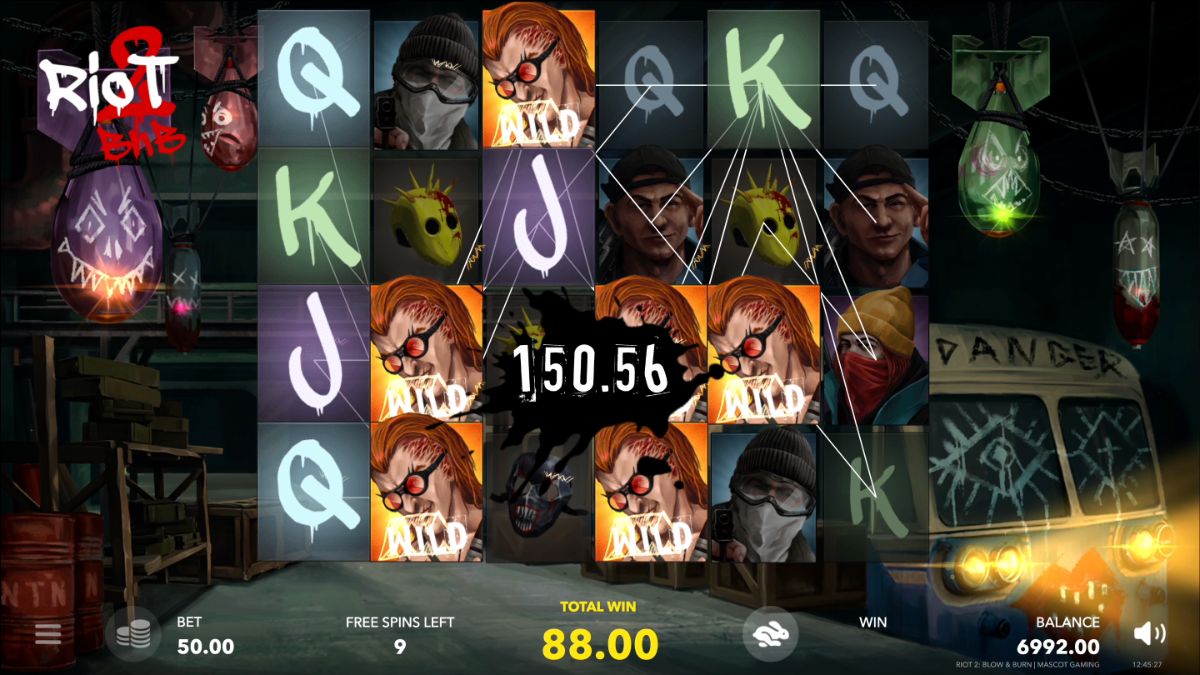 Identical to the previous feature, it requires the player to hit Barrel symbols instead. However, to activate it you need to fill up 16 bars of the scale. As the requirement is higher, the reward is also more exciting; a series of 25 FS instead of 15. 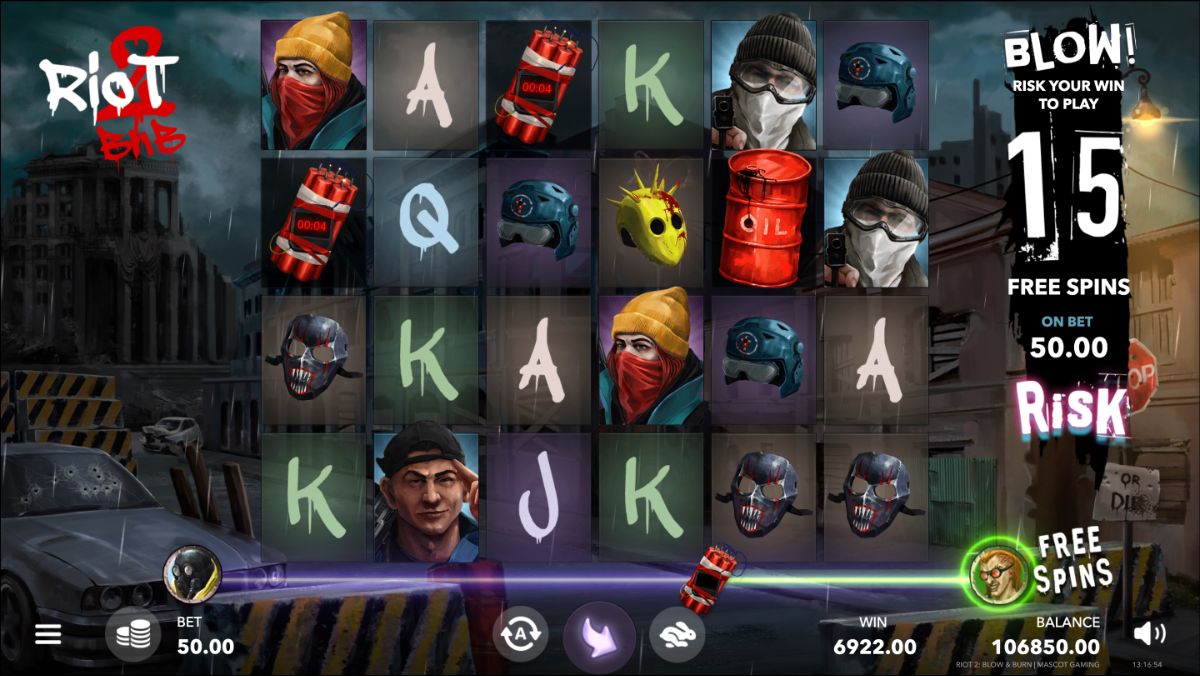 As RIOT slot introduced the Risk and Buy feature to the players, RIOT 2: BLOW AND BURN could not hit the market without it. This feature allows exchanging your winnings for the Free Spins or purchasing them for coins in case of the lost round.

RIOT 2: BLOW AND BURN is a perfect sequel to the legendary release from Mascot Gaming. It improved on every aspect from design to mechanics while introducing new features as a bonus.