Riot by Mascot – the Game-Changer of Casino Games with Demo Available!

Recently, we announced an article series on the video slots that are most popular among players of our online casino partners. And we are happy to continue writing such texts for you. Here goes the list of Mascot Gaming projects that gained the most popularity after the release. We'll review each of them in the nearest future. By clicking the links, you can play free versions of each slot mentioned below:

Yep, the name of this slot is Riot, and its contents actually correlate with that title. The game has many things to wonder and amaze the gambling world as a whole, and every dedicated player in particular. Riot sets you in the world of dystopia. The world that ended. Survivors live and fight each other on the ruins of human civilization. And of course, they don't stop looking for treasures even after the world has gone long ago. 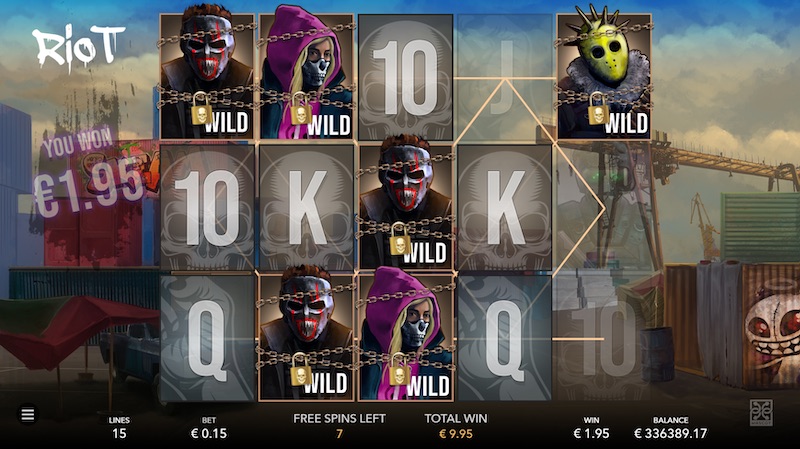 At Mascot Gaming, we have got the concept of distinguishing two types of casino games. They are:

Riot is referred to Traffic Games category. It is the type of both released and demo casino games having their main goal to attract new players. To do that correctly, stably and effectively, the traffic-oriented game should be especially innovative. This means, such slots always have something unusual in them:

Of course, these Mascot Gaming games are bound to be filled with different innovative features as well. The main innovation serving as the very basic pillar of the Riot slot game is the unique Risk & Buy concept. We'll pay special attention to it further in this review. 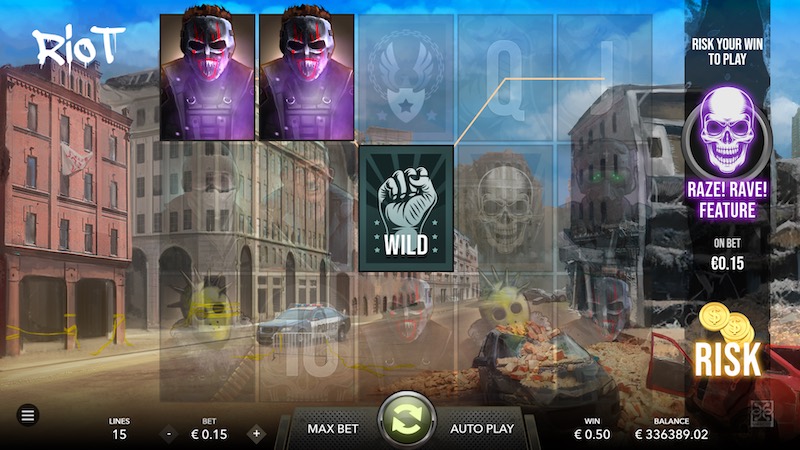 Before we start, here is the point definitely worth noting: in February, we showed Riot slots among other demo casino games during the ICE2020 show in London. And it had overwhelming success during the free play demonstration.

Riot became the pioneer of the entire series of slot games based on the Risk & Buy feature. The Robin of Loxley slot is already released and available, and there are more games incoming. These are:

Mascot Gaming continues developing and improving the concepts in general and slots in particular. By tracking the reaction of the online casino enthusiasts on our solutions and games, carefully analyzing both positive and negative feedback, and responding to the public opinion, we can stay confident about the quality of the video slots we create.

Okay, enough with the general part, let's proceed with the Riot review!

As we mentioned already, Riot places the player into the world of dystopia. The civilization is destroyed, the cities are in ruins, and humans only try to survive till the next moment. We tried to keep up with the general innovative concept in different aspects, and the realistic picture you see on the screen is called to become an immersive instrument diving you into the atmosphere of no hope.

In other words, our artists worked hard on making Riot look as we wanted it to, and we sincerely hope you'll like the setting they created. The top online casino slot should be visible at once.

Now, let's proceed with some basic info on Riot. 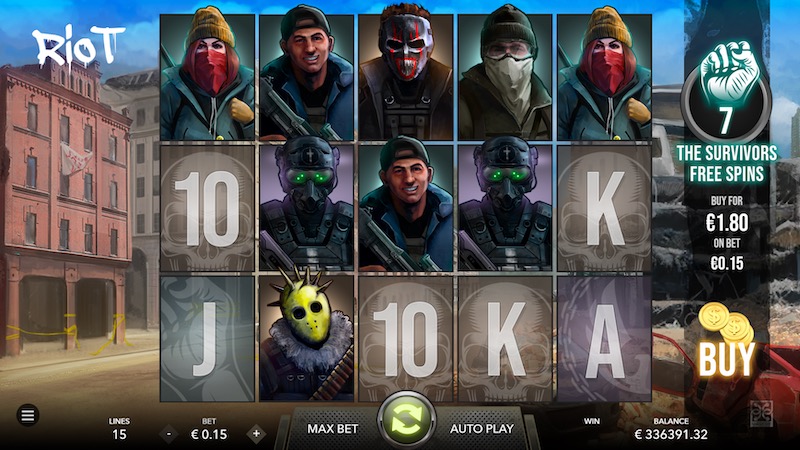 For the first glimpse, is a pretty standard five-reel and three-row slot game. Technical information:

Riot is called to attract new players, so it has high RTP rates. However, it is a bit riskier when compared with the previous slot we reviewed – CanCan Saloon. Lower hit rates and higher volatility may make gamblers think this slot is not suitable for newbies. However, the main innovation of the Riot game is its grounding feature. And it is the real game-changer. So, let's not hold it on for too long.

So, the focus feature of the Riot game is the Risk & Buy feature. The player can access it after each spin they initiate and complete. There is no difference whether the spin was a lucky one or not. The Risk & Buy offers you an opportunity to literally buy one of three Free Spin opportunities potentially boosting the overall prize: 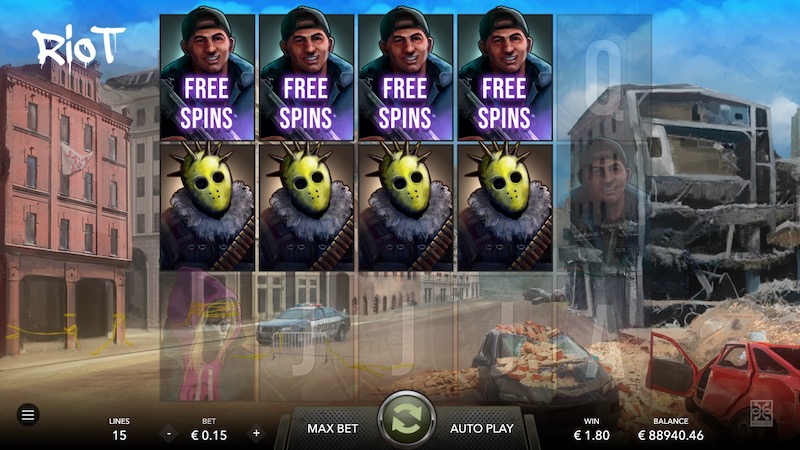 Those free spins can be gained randomly to raise your involvement even higher. Additionally, all the bonus features apply to every free spin, so it is only your luck that determines how much reward you get after taking a risk.

In case your last spin brought you the reward, it is possible to Risk it. The winning spin reward does not go to your stash but you get one of three Free Spins feature series. If you use the option, you get the chance to multiply your next award after the series.

If your last spin was not lucky at all and brought you zero, you still can Buy the Free Spins and get the additional chance to win something big or small. In any case, you count on the luck only: the quantity and rates of every free spin gets varied from time to time and set randomly.

By the way, the maximum win multipliers in Riot reach up to x5000 of the initial bet. In a current Riot demo casino game version, the minimum bet is $0.15, the maximum is $30.

Mascot Gaming designers and developers tended to offer every gambler even more excitement by offering bigger rewards with the idea of Risk and Buy. Additionally, the unknown perspectives will make the experience more thrilling, because you know there is a chance for your reward to increase if you are ready to be risky. 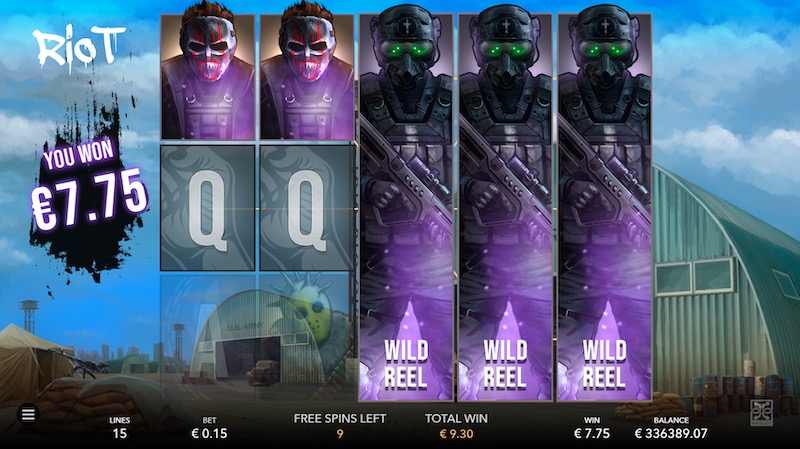 Riot is also packed with those standard features to turn the game into the most exciting gambling experience one ever faced:

We invite every passionate gambler to try out the free play opportunity with Riot before the release. This is how you can check it and get involved in advance. We sincerely hope you'll like the experience!